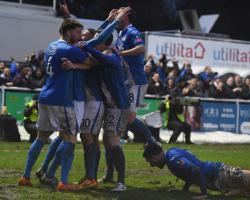 However, Bolton secured a replay three minutes from time after Pratley netted a scrappy leveller on a bog of a pitch.

It was so bad that the game itself was in serious doubt, with referee Iain Williamson only giving the green light for the match to go ahead 90 minutes before kick-off

The rain continued on the already sodden pitch and it was Eastleigh who started the game brightly, with Yemi Odubade and top goalscorer James Constable having the best chances in the opening half an hour

Spitfires striker Odubade was looking the most dangerous player on the pitch but had to be taken off with a hamstring injury, leading Kaid Mohamed to come on in the 35th minute, just days after arriving from Bath

Bolton, who are bottom of the Championship, started to come into their own as the first half came to a close, but Eastleigh goalkeeper Ross Flitney was on fine form to deny Wellington Silva and Dean Moxey.

The hosts, showing the confidence of a side without a defeat since November, came out strongly after half-time and it did not take long for Jai Reason to unlock Neil Lennon's side

The winger's dangerous cross sent the majority of the club-record 5,025 crowd wild as Bolton defender Dervite could only inadvertently direct the ball into the back of his own net

That own goal seemed to wake Bolton up and they began to play more like a second-tier team, but Eastleigh were still pressing at the other end and would have scored a second had Ben Amos not provided a crucial save to deny Constable

Amos picked up the ball after captain Pratley's attempted clearance saw the ball get stuck in the mud, but the Spitfires could not capitalise

The home side began to tire as the game came to a close and the Trotters finally found the found the back of the net three minutes from time, with Pratley's header finding the net during a penalty-box melee

Bolton came close to sneaking an injury-time winner as a corner from Silva went just wide of the post, but Eastleigh - the only non-league side to reach the third round - were not to be denied a replay at the Macron Stadium.