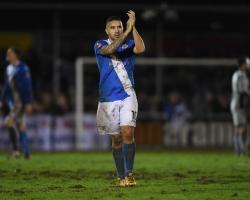 This is the first time in over 40 years that only one non-league club has reached the third round, with the up-and-coming Hampshire side having progressed further than ever before.

The Spitfires overcame Bromley and Stourbridge either side of a memorable victory at Crewe to reach the third round, where only a late Darren Pratley goal denied them a famous win at the Silverlake Stadium.

The 1-1 draw means the teams will again do battle in a replay on Tuesday - a match rights holders BT Sport and the BBC have overlooked for TV coverage, along with a possible fourth-round tie at home to Leeds.

Eastleigh chairman Stewart Donald has made his anger clear and midfielder Lee Cook, formerly of QPR and Fulham, called the decision a "disgrace" - sentiments that appear to run throughout the team.

"I am going to use the word disgusting with you," Reason told Press Association Sport.

"The BBC is the tax payer's channel - we pay for the BBC and we're normal working people.

"We're the only non-league side to get through and I just think they should have given a little back to the underdogs, and I know Bolton need the money.

"Do you know what, it's probably not the money for us - we just want the coverage to show what a great club Eastleigh Football Club is.

How can you be the only non-league team, a potential upset to go to the fourth round and you can't even get on the telly?"

"I think BT Sport and the BBC have missed out on a good game here.

"The first leg had everything - it was a proper cup tie, last-minute goals, big chances.

"It's just a shame that we've missed out and, at the end of the day, maybe they're going to miss out on a potential upset.

"We will just keep our heads down and let the football do the talking now."

Reason and his team-mates will make the 236-mile journey to the Macron Stadium on Tuesday morning - a long coach trip they will head on buoyed by Eastleigh's display in the first match.

"It was disappointing coming off after the game," said the midfielder, whose cross was turned into his own net by Dorian Dervite.

"We were so close, matched them well and played some fantastic football for the surface."

Reason freely admits Tuesday's match will be one of the biggest of his career, but it is the kind of game that could become increasingly regular if Eastleigh can secure promotion from the Vanarama National League.

Moving into the Football League was always the Ipswich academy graduate's ambition after joining from Braintree in 2012, with the promises made by chairman Donald bearing fruit on and off the field.

The progress has raised expectations and means Eastleigh are as short as 3/1 to win in Bolton - not that Reason is taking the embattled Trotters lightly.

"No matter what is going on behind the scenes, they are Championship players," the 26-year-old added.

"We're still a non-league side - albeit hoping to be a Football League side one day - so we've got to give them respect.

"But I think we've gained their respect by the way we played and have seen how we can cause them trouble now."