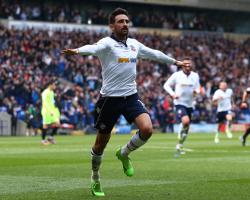 Goals from Jem Karacan, David Wheater and Adam le Fondre gave Phil Parkinson's side a comfortable 3-0 victory and meant they could not be caught by Fleetwood, whose 0-0 draw at home to Port Vale saw the visitors relegated.

It also meant Fleetwood dropped to fourth place in the table after Scunthorpe came from behind to beat relegated Coventry 3-1 thanks to second-half goals from Kevin van Veen, Neal Bishop and Hakeeb Adelakun

Lee Gregory and Tony Craig put Millwall 2-0 up and after Jermaine Easter pulled one back for Rovers, Gregory restored the visitors' two-goal lead on 35 minutes

Chris Lines made it 3-2 just before the interval and when Billy Bodin levelled with a free-kick on 75 minutes, Millwall were out of the play-offs due to Southend leading at home to Bury

However, Shaun Hutchinson headed the winner from a corner seven minutes from time to render Southend's 1-0 victory - courtesy of a goal from Stephen McLaughlin - irrelevant

Port Vale's failure to win at Fleetwood meant Gillingham were not made to pay for missing a penalty in their 0-0 draw at Northampton, with Bury also safe despite their loss at Southend

Bradford, who will take on Fleetwood in the play-offs, drew 1-1 at Rochdale, while Sheffield United ended the season with 100 points thanks to a 3-2 win over 10-man Chesterfield, who had Dan Gardner sent off in the second half.

Elsewhere, MK Dons ended the season in style with a 4-1 win at Walsall, while Charlton beat relegated Swindon 3-0 and Oxford won 2-0 at home to Shrewsbury

Wimbledon and Oldham played out a 0-0 draw.