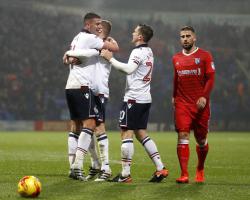 The award comes after a great December for the Bolton striker who has scored 2 goals in four games with a brace against Gillingham.

The 26-year-old forward joined Bolton in 2015 on a two-year deal from Sheffield Wednesday and he has gone on to make 51 league appearances, scoring 10 goals

His qualities such as his work rate, physical strength and ability to win balls played up to him have made him invaluable for Bolton who sit second in the EFL League One table after 25 games.

Voting is now open for the Sky Bet League Two PFA Fans' Player of the Month for December 2016.