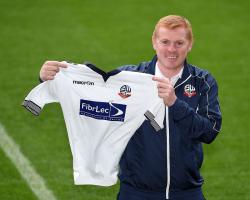 Bolton 3-1 Wigan: Match Report - view commentary, squad, and statistics of the game as it happened.Wigan's awful form continuesWigan's woeful run of form continued as three goals in an 11-minute second-half blitz saw Bolton leapfrog their neighbours in the Sky Bet Championship table with a 3-1 victory.Latics, who hit the woodwork twice in the first period through Callum McManaman, were left shell-shocked as Neil Lennon's rampant Wanderers put them to the sword just after the break.Max Clayton's 50th-minute opener was swiftly followed by Craig Davies' header and Lee Chung-yong's penalty as Wanderers maintained their revival under Lennon to leave the relegation zone for the first time since September.McManaman claimed a consolation but Wigan, FA Cup winners just 18 months ago, could conceivably be one of the club's occupying a bottom-three berth heading into next week's international break, with the pressure ramping up on boss Uwe Rosler after just four wins in their previous 24 fixtures.Prior to kick-off, Wigan published a letter on their official website from Londonderry-born Republic of Ireland international James McClean explaining why he would not be wearing a poppy-emblazoned shirt like other players up and down the country this weekend.McClean was named among the substitutes at Macron Stadium and it was McManaman, the winger who got the nod ahead of him, who was creating early havoc down the left flank.He drove past midfielder-cum-full-back Josh Vela in Latics' first attack, with the subsequent cross being volleyed just wide by Shaun Maloney.McManaman went closer still when he cut inside Vela, unleashing a dipping effort which hit the top of the crossbar.This derby, which ex-Celtic boss Lennon admitted may lack the intensity of the Old Firm affairs he had become accustomed to north of the border, was being played at breakneck speed.Leon Barnett's sliding intervention stopped Dorian Dervite's shot before the in-form Lee's slide pass found Clayton in stride and Scott Carson was forced to beat away his try.Both sides were exhibiting a wastefulness in the final third as Mark Davies dragged wide after a promising foray and Roger Espinoza dallied when bearing down on goal

However, in McManaman, Wigan had some incisiveness, and now occupying a spot on the right, his left-footed attempt shaved a post on the stroke of the half-time whistle.But it was one of Bolton's own promising youngsters who broke the deadlock five minutes into the second period.Lee and Clayton linked up again and with the angle narrowing for the former Crewe trainee, he coolly slotted a first-time finish between Carson's legs.Lennon's men sensed blood and after Clayton curled narrowly over, they soon doubled their advantage.Liam Feeney's hanging back-post cross was begging to be headed home and the incoming Craig Davies duly obliged with a powerful nod down.Two goals in five minutes almost became three in six when Clayton capitalised on Leon Barnett's weak back-pass only to bend one just past the post.McClean was then introduced to boos from the home faithful but his team-mates were unravelling at the other end of the pitch as Barnett conceded a penalty for wrestling Matt Mills as a long ball came into the box.Lee stepped up to take the spot-kick and drilled it straight down the middle to extend the hosts' lead further.Bolton showed some mercy by easing off the throttle and Wigan were able to claim a consolation goal with 11 minutes to go as McManaman finally found the net with a brilliant volley.His muted celebrations spoke volumes, though, as Bolton jumped above their rivals in the table, with the two clubs on seemingly different tangents