Bolton Wanderers manager Sam Allardyce is said to be lining up an ambitious double transfer swoop in the summer for French based duo Dado Prso and Olivier Kapo.

Allardyce is said to have made enquiries over the two players in recent weeks, both will be out of contract during the summer and the Trotters manager is said to be keen to add them to his squad. 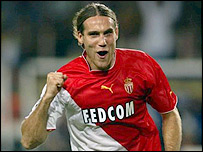 Croatian international Prso (above) has said that he will decide on his future with French League leaders Monaco after he has represented his country in the European Championships in the summer. The 29 year old has scored nine goals this season at the Stade Louis II and a number of clubs in Britain have shown an interest in the giant striker notably Fulham, Portsmouth and Glasgow Rangers whilst AC Milan have also looked to add the player to their ranks.

Attacking midfielder Kapo (pictured) isn't too short of admirers with ourselves, Fulham, Marseille, Barcelona and Paris Saint Germain all ready to try and tempt the player away from Auxerre at the end of the current season. At the moment PSG look likely to take the player to the French capital when his contract runs out in June but the 23-year old has expressed a desire to play on foreign shores.

At the moment everything is down to speculation but it seems as if Big Sam is already looking to the future in his bid to bolster the ranks at the Reebok Stadium. He is expected to work tirelessly in the next week to add new faces on short term deals before the 31st January deadline with at least two players needing to be added to compensate for the short term loss of Jay-Jay Okocha during the African Cup of Nations whilst also covering for long term injury victims Ricardo Gardner and Florent Laville.