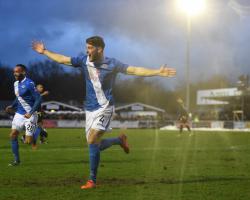 An own goal from Dorian Dervite early in the second half put the National League side in sight of a famous victory in their third-round tie at a rainswept Silverlake Stadium, but Pratley spared Bolton's blushes

Morrison levelled in injury time after goals from Jonathan Kodjia and substitute Kieran Agard had seen the Robins come from behind to lead with just six minutes remaining at The Hawthorns.

Saido Berahino, with his first goal for almost three months, had opened the scoring for West Brom in the 67th minute.

Holders Arsenal had to come from behind in their all-Premier League tie against Sunderland.

Jeremain Lens struck early for the relegation-threatened Black Cats, but Joel Campbell quickly replied and two goals in the space of three second-half minutes from Aaron Ramsey and Olivier Giroud put the Gunners through.

Another of the competition favourites, Manchester City, had few problems against a top-flight rival as they eased past Norwich 3-0 with goals from Sergio Aguero, Kelechi Iheanacho and Kevin De Bruyne.

In-form Troy Deeney scored for a seventh time in 12 matches as Watford beat Newcastle 1-0, while Crystal Palace won 2-1 at Southampton where Joel Ward and Wilfried Zaha scored either side of an Oriol Romeu equaliser.

The Blues led through Michael Morrison and later missed a penalty through James Vaughan, but the Cherries had the final say after Lee Tomlin's spot-kick leveller.

Stoke also had to dig deep, with League One hosts Doncaster cancelling out Peter Crouch's opener.

Nathan Tyson scored the equaliser but there was to be no shock as Jonathan Walters secured a 2-1 win in the 57th minute.

Championship leaders Middlesbrough went down 2-1 at home to Burnley after the Clarets replied to Diego Fabbrini's opener with goals from Rouwen Hennings and Stephen Ward.

Ipswich, sixth in the second tier, needed an 88th-minute equaliser from Ryan Fraser to claim a 2-2 draw at home to League Two Portsmouth.

Goals from George Moncur and Marvin Sordell earned League One Colchester a 2-1 win over Championship Charlton, while Sam Mantom scored the only goal as Walsall won 1-0 at second-tier side Brentford

Championship Preston were also beaten by lower division opposition as they lost 2-0 at Peterborough.

Ricky Holmes scored twice as Northampton claimed a 2-2 draw against MK Dons while Bury and last season's giant-killers Bradford will also replay after a goalless draw at Gigg Lane.

Darren Bent's 85th-minute winner saw Derby through with a 2-1 victory at Hartlepool while Sheffield Wednesday overcame Fulham by the same scoreline thanks to an Atdhe Nuhiu winner.

Jamie Ward scored the only goal as Nottingham Forest beat QPR 1-0 while Newport's clash against Blackburn at Rodney Parade was postponed because of a waterlogged pitch.

Wayne Rooney scored an injury-time penalty winner as Manchester United progressed with an unconvincing 1-0 victory over League One Sheffield United at a wet Old Trafford.

In a game of few chances, it took the late introduction of Memphis Depay to finally create an opening, the Dutchman winning a penalty after being fouled by Dean Hammond

Rooney finished emphatically from the spot to secure the win for relieved manager Louis van Gaal.